Are you writing your memoir? Or dreaming about it? Wherever you are in the process, I can help.

I am a Martha Beck certified life coach and the author of 11 published books including an award-winning memoir. I worked as an in-house editor for five years, and I now teach in UBC’s creative writing program and coach and mentor people like you.

I work in a dual role, as coach and mentor. As a coach, I’ll help you dig deep; I'll help you define the scope of the story you want to tell. As a mentor, I’ll help you learn how to tell your story, and I’ll help you develop and maintain the discipline required to keep going all the way to the end.

We'll start with a discussion of the project as the you see it, and work our way to a clear, shared understanding of the project’s purpose and the themes/topics you want to explore. Next, we will develop a timeline and decide how we want to work together: what combination of telephone or Skype (or in person if you happen to be nearby) sessions and emailed notes would best serve the project.

If you wish, when the time is right, I will work with you to develop a plan for getting your book into print, and help you navigate the world of publishing.

Is this the year you write the book that has been languishing inside your head and heart for years? If so, and you’d like a little help, get in touch and we can schedule a complimentary 30-minute chat to see if we would be a good fit for each other.

Most of my speaking these days is connected to writing. I offer  talks and workshops on writing, including writing from life and healing through writing. I work with small groups of aspiring or experienced writers, or with groups of teens or children. I also give inspirational talks to adults who want to understand better how books come to be or how to incorporate writing into their own lives.

Get in touch and we can work together to plan what would work best for the group you have in mind.

On Grieving and Growing

My sister was a sex worker and my aunt was a nun. I continue to draw strength and wisdom from both these women, though Sarah died in 1998 and Aunt Minke died in 2013. In this talk, I explore how our greatest losses and our greatest gifts are often bound up together.  Each of us has multiple sources of strength and wisdom within easy reach, if we only know where to look.

This talk can be adapted to different lengths and for different settings. It can accommodate Q and A, and form the backbone for a half-day workshop. 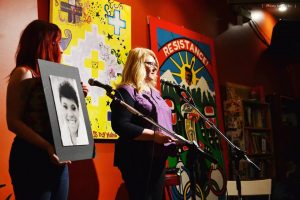 How I Got Into Speaking

I’ve been speaking at conferences and festivals and in schools (from kindergarten through to graduate school) ever since my first book came out in 1991.

A shift happened after my sister disappeared, and I found myself speaking to media and, as time went on, to groups of all kinds, about what I was learning as I searched for her. After my memoir, Missing Sarah, came out, I did still more speaking, often sharing Sarah’s journal writing and poetry, which I had incorporated into my book. My goal throughout was to give my sister a voice, to help undo some of the misinformation and stereotyping that makes women on society’s margins so vulnerable to violence.

In 2014 I gave a TEDx talk at Simon Fraser University entitled The Red Umbrella: Sex Work, Stigma and the Law. To date it has been viewed well over 30,000 times.

On various occasions, I have toured British Columbia, up through Prince George to Prince Rupert and up to Fort St. John; I’ve also toured Saskatchewan, southern Ontario and Prince Edward Island, and spoken in parts of the United States. I was Vancouver Public Library’s first writer in residence in 2005 and the University of Northern British Columbia’s first writer in residence in 2012. I have spoken at many writers’ festivals, and spoken and given workshops in prisons and juvenile detention centres.

I’ve addressed these groups, among others:

And I’ve spoken at the following events: