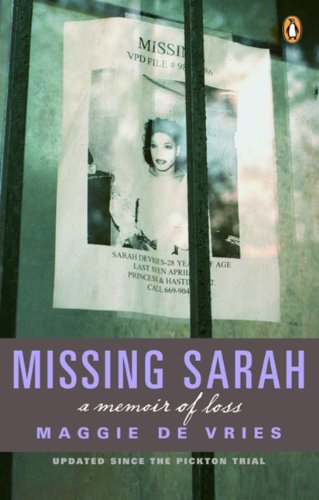 Missing Sarah: a memoir of loss

My sister Sarah is one of Vancouver's missing women, but she isn't missing anymore.

This is the story of Sarah, told through her own poetry, excerpts from her journals, her parents' and siblings' memories and the recollections of people who knew Sarah during her fourteen years downtown. A portrait emerges of a bright, funny, charismatic and sensitive woman trapped in a downward spiral of self-loathing, prostitution, drugs and violence.

My book Missing Sarah: a Memoir of Loss, comes out of a very important relationship in my life and a personal tragedy. It is not a book for children, although many teens are reading it. Currently sixty-nine women are missing from Vancouver’s downtown eastside. Almost all the women were addicted to heroin and most of them were sex workers, working to support their addiction. A man named Robert Pickton has been charged with the murders of twenty-two of those women. My sister, Sarah's DNA was found on his property in August 2002 and in the spring of 2005, he was charged with her murder.

A new edition with an additional chapter about what transpired in
the five years after the book was first published came out in July, 2008.