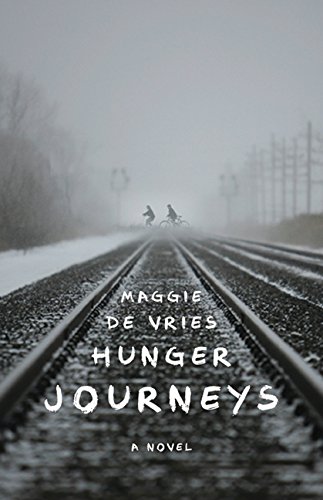 Maggie de Vries’s first foray into young-adult fiction is a triumphant, realistic account of a young woman’s remarkable efforts to survive the German occupation of Holland in the Second World War.

De Vries doesn’t cheapen the history or the novel’s plot with either the romance or the lechery of Lena’s adult guardian in Almelo.

In wartime, young women do find themselves in compromising situations. And one of de Vries’s themes for the teen reader is that trying times bring out the best and the worst in people. Her protagonist is a dynamic model of courage during great difficulty.

The strongest element of Hunger Journeys is the richness of the characters within a gripping plot. It's impressive writing, but not unexpected from the woman who wrote children's books such as Tale of a Great White Fish and the memoir Missing Sarah.

Hunger journeys were often made by the starving residents of Amsterdam into the countryside to search for food in the closing months of the Second World War. The hunger journey in Vancouver author Maggie de Vries' first YA novel is only the beginning of the tale, however.

Lena is a naive, awkward teenager struggling to understand the complexities of living in German-occupied Holland. She copes by convincing herself that she doesn't care, that what happens around her is not her concern (though she does feel some guilt about not helping a Jewish friend who has been taken away). Lena is thrilled when Sofie, a charming, flighty, irresponsible girl, befriends her. Sofie persuades Lena to go on a hunger journey, but things quickly go wrong. The girls have to rely on two young German soldiers, one of whom, Albert, takes a fancy to Lena.

Hunger Journeys is replete with convincing details and complex characters and relationships. Lena's father is Dutch, yet he is unpleasant and anti-Semitic. Albert is the nicest person Lena has ever met, but is he a monster who has herded Jews into cattle trucks or a good man "who just happens to be on the wrong side"?
De Vries has done a masterful job of creating a believable world peopled with characters whose loyalties are agonizingly divided between family, friends, and nation. Lena is constantly presented with dilemmas that are never black and white and solutions that are rarely perfect. Through these struggles, she grows up and comes to understand the value of friendship - even when that friendship is dangerous and the friends flawed.

Hunger Journeys is an exemplary young adult novel, with a quick-paced and interesting plot line, characters who involve the reader on many levels and a setting which transports the reader to a different time and place. Thus, it can be read as a book which combines adventure, intrigue and a touch of romance. However, it also ties in well with any curriculum dealing with World War II and the war theatre of Europe since it truly makes the history of that time come alive. A useful inclusion in the book might be a map of the Netherlands, particularly showing Amsterdam and some of the surrounding towns. This would help verify names and places for the historian reading the book as well as providing terms of reference for the casual fiction reader as well.

Hunger Journeys is historical fiction at its best. Readers are taken into the Netherlands of 1944 from the first page and are immediately immersed in the sights, sounds and sentiments of that terrible time. But beyond that, De Vries introduces us to characters with strength and determination, passion and humour which supersede any specific historical era. Closing the book was not easy - I wanted the story to continue and the characters to live on. De Vries so involves her readers that it seems difficult to return from the reality of her fiction to the real world! The only consolation is that Hunger Journeys is De Vries’ first young adult novel, so hopefully readers – and reviewers! – will enjoy many more to come.

It’s World War Two in Amsterdam. Teenaged Lena leaves her starving family to travel by train with her friend, Sofie, to Almelo, a town close to the German border. It’s a risky plan. They have false papers and are quickly pulled off the train by German soldiers. Only by fluke do they get back on again -- with the help of Albert, one of the other soldiers. After Lena discovers that the train had also been used to transport Jews to concentration camps, she questions the ethics of her connection with a German soldier and fears her new friendship with the helpful Albert may lead her into more danger. Sofie, too, befriends a soldier, a relationship that quickly turns serious and has unforeseen consequences for both girls.

My husband, Roland, was born in the Netherlands in 1954, nine years after the end of the Second World War; his family immigrated to Canada’s West Coast three years later. My father also emigrated from the Netherlands, coming to Canada two years before Roland was born. I grew up in Vancouver in the ‘60s and ‘70s listening to Dad’s stories, and we lived in Holland when he was on sabbatical the year I was thirteen, the same age he was when he watched Canadian tanks roll into Leeuwarden, a town in the Dutch province of Friesland, and learned that the war was over.

Half a century later, when my mother-in-law, Lin, told me about leaving her Amsterdam home with her friend and sneaking onto a train in the early months of 1945, I was immediately gripped. She and her friend were caught by the Germans and threatened until her friend got sick and they were released. A young German soldier, Albert, helped them hide away in a cattle car for the journey across the country; Lin has vivid memories of hiding in a field while the train was shot at in broad daylight.

Albert fell in love with her and gave her a tiny bottle of perfume, and she wore that scent for decades. After the train journey, she and her friend met up with Albert one night in a bar. Something possessed her, there, among those German soldiers, to utter the brazen words, "If I could get my hands on that Hitler of yours, I'd scratch his eyes out."

The family who took her in was not welcoming to her. The father tried to rape her, and she was forced to assist with the slaughter of cows in the lean-to attached to the house. She had to clean up all the blood; should the Germans find even a drop, she was told, the whole family might be lined up and shot.

Lin’s stories knocked around in my head for quite a few years before it occurred to me to place them at the heart of a book. Then, when I started researching for the book, including a trip to the Netherlands, a great deal of reading, interviews, and much poring over maps, I realized that Lin’s story was only one of millions. And the book began to grow and change. A train journey was central to my story, but trains had a much more sinister purpose in the war. They carried millions of people to their deaths. My story changed further to acknowledge that, to keep Lin’s train “adventure” in perspective.

Every month through most of the war, a train left Westerbork, the Dutch concentration camp where Jews were housed temporarily, for the death camps. Anne Frank and her family were on the train that left Westerbork on September 3, 1944. As we all know, Anne never returned.

The day after that departure was Mad Tuesday, the day the Dutch took to the streets believing that their liberators were on their way, and the day that Lin’s story begins. They were bitterly disappointed. Two weeks later, the British and Americans mounted a major offensive at Arnhem, Operation Market Garden, an attempt to cross the Rhine. Another failure. The next day, the Dutch leaders, from London, ordered all Dutch train workers to go on strike. Thousands went underground. From then on, if the Germans wanted the trains to run, they had to run them themselves. That is why the Germans were running the train in which Lin and her friend stowed away. And it may be why no further trains left Westerbork. Anne Frank’s was the last transport.

When I interviewed my father and Lin, one part of their story was almost identical, even though they were in two different parts of the country when it happened. Both were deeply affected by the liberation, by the joy of it, the excitement of seeing the Canadians arrive in their tanks. But both also remember something horrible from that day: the public humiliation of women who had been marked as collaborators. Both were sickened at the time and knew that what they were witnessing was wrong. I wanted to include that mixture of joy and horror in my story. In my book, Lin’s friend’s fictional counterpart, Sofie, has the ill fortune to be branded a collaborator and placed on a stage, where she is stripped to her underwear and has her head shaved.

While Lin did not get involved in the Dutch Resistance, the fictional Lin—Lena--did. And when I read about a young Dutch resistance courier, Elsa Caspers, who rode her bike into a canal at night while carrying arms, I gave her experience to my character.

Neither, in real life, did Lin travel to the country from Amsterdam on a Hunger Journey to beg for food. Her older sister, Margriet, did many times, and in my story I sent Lena along on the first of those trips, and then had the Germans confiscate a bicycle so that they could no longer go together. Lin’s youthful prudishness and her belief in Heaven and Hell make it into the story, though toned down substantially. She is innocent, though, and her journey tests her and shatters that innocence, while hopefully strengthening her sense of responsibility and her engagement with others.

Hunger Journeys is a blending of fact and fiction, research and imagination. It was a challenge and a joy to write a story that is bound by historical fact, set in a period before I was born, in a country where I have spent months, not years. I am honoured and humbled by the trust that so many have placed in me, sharing their stories generously, and leaving me to do with them as I will.