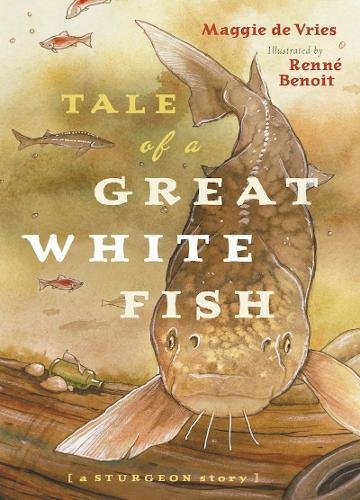 Big Fish is ancient and enormous. Many times in her long life she has barely escaped death. She is chased by predators and almost crushed in a rock slide. She swims away just in time when her lake home is drained. She is hooked by fishers and threatened by a mysterious disease. And always she faces starvation. Big Fish is a fighter. But how long will she and sturgeon like her continue to survive?

Big Fish started out as an egg in 1828 and still swims in the Fraser River today. She is now 20 feet long and weighs 1,698 pounds. Big Fish, of course, is fictional, but fish just like her do live in the Fraser River, fish that big and fish that old. I wrote Tale of a Great White Fish for the Rick Hansen Foundation, as Rick Hansen is deeply involved in protecting sturgeon and salmon in addition to spinal cord research. I knew almost nothing about sturgeon when I began, and today I am still learning. I studied the history of the Fraser River to determine what the main threats to sturgeon would have been over the years and I looked in particular at the intersections between sturgeon and human beings. We humans have been very hard on sturgeon as we have on so many other species, but today they are protected. A tagging program is in place. And slowly the numbers in the Fraser River are climbing.

The illustrator of Tale of a Great White Fish is Renné Benoit, an award-winning artist whose charming illustrations have delighted readers of many children’s books, such as Jason’s Journey and Goodbye to Griffith Street, which I edited and which won the Christie Harris Illustrated Children’s Literature Prize in 2005. Renné lives in the country in Southern Ontario with her husband and her two dogs.

Tale of a Great White Fish
A Quill & Quire Review

Quill & Quire  "Maggie de Vries’s latest book wonderfully recreates the impressive tenacity of this species. Her writing is clean and straightforward, and she presents her information in a timeline format that is most effective…. We are both reading a work of non-fiction and indulging in the life story of a quiet heroine."

Tale of a Great White Fish
Review by Louise Donnelly

Rick Hansen remembers being on the banks of the Fraser River as a boy and witnessing the spectacular sight of an enormous fish leaping free of the muddy water. Today, he’s chairman of the Fraser River Sturgeon Conservation Society and working to safeguard these "precious" fish—sturgeon—and their beleaguered aquatic ecosystem. Maggie de Vries evokes the precarious existence of the giant white sturgeon in Tale of a Great White Fish (Greystone $19.95). The heroine, Little Fish, is spawned in the late spring of 1828. Thirty years later she is Fish and, ripe now with thousands of eggs, begins the arduous journey upstream to release her eggs on the rocky river bottom where she was hatched. Eighty-five years later, over twelve feet long and weighing 800 pounds, Big Fish, the giant white sturgeon, is ready to spawn for the sixth time. This time "the riverbed shakes, water tumbles" and "other fish, alive and dead, fly past." The construction of a railway has caused the Hells Gate Slide and the falling rock changes the water flow. Big Fish searches for a new spawning ground. By 2005, at twenty feet long and close to 1700 pounds, Big Fish still miraculously endures despite pollution, scarcity of food and removal of vital sand and gravel from the river bottom. Renné Benoit, who illustrated Goodbye to Griffith Street, captures the two-century adventure of Big Fish and the epic struggle for survival of an ancient and magnificent creature.