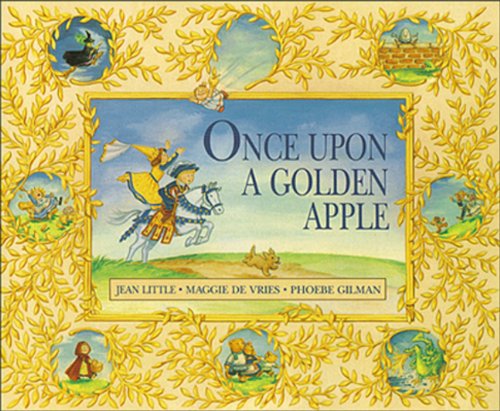 Dad begins his storytelling with "Once upon a," but soon extemporizes on common fairy-tale themes. His children are horrified. "There lived Snow White and the three bears" and many similar mix-ups just won't do, and they insist that he tell the story right . It takes the entire book to fix his fractured retellings, but finally everyone arrives at a happy ending. The pacing of this story is lively, with double-page spreads (often with four-pictures per spread), fantasy scenes, and real life settings tumbling after one another and unified by a flower-and-scroll border. Most of the allusions will be familiar to culturally literate children, but one or two will stump even a children's librarian, and there's no key or identification list. How charming to see the father doing the reading. An especially pleasant book for older preschoolers at story hour.

Once Upon a Golden Apple
A Review by Gwen Maguire

Jean Little, an award-winning author, has written a number of children's books, which include Mama's Going to Buy You a Mockingbird (Penguin, 1984) Lost and Found, Little by Little and Stars Come Out Within (Viking Canada, 1990). She has co-authored this picture-book with Maggie de Vries, a graduate student attending the University of British Columbia.

Together the authors have produced a hilarious tale that will immediately capture the attention and interest of any child. The story describes in detail a father reading a delightful mixed-up fairy-tale storyline to his two children. The authors very skilfully use the fairy-tale storyline to involve children in the making of their own individual fairytale and at the same time they bring in many mixed-up and well-known children's rhymes and fairy-tales.

The story begins with dad introducing the fairy-tale with "Once upon a ... golden apple ...." The children respond, "No! No! No!" He then begins again with "Once upon a magic pebble ...." and "Once upon a singing fiddle ...." With each suggestion the father makes, the children become more adamant in their "No!" responses until finally they jump for joy with an elated "Yes!" when dad finally says, "Once upon a time".

Everything seems to go wrong in this fairy-tale. Snow White lives with the three bears, Little Red Riding Hood befriends Chicken Little, a princess kisses a cow with a crumpled horn and turns him into a roly poly pudding. Eventually, the problems are solved and everyone lives happily ever after.

Children will thoroughly enjoy this picture-book, which Ihighly recommend as an ideal choice for both preschool and Primary classrooms.

Copyright © the Manitoba Library Association. Reproduction for personal use is permitted only if this copyright notice is maintained. Any other reproduction is prohibited without permission.