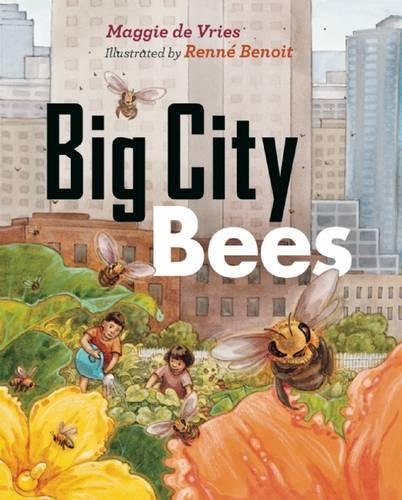 Around that time, I visited my friends, Dianne Wells and Reg Kienast, up in the hills near Armstrong, B.C. Now, Dianne is a beekeeper and Diane and Reg sell honey and candles from their home and around the province. On that visit, Dianne suited me up and took me out to observe as she cared for her hives. She opened a hive right up, and pulled out a frame, swarming with bees. I was fascinated! She pointed out the queen, slightly larger than the others and set apart by an orange dot on her back. Beekeepers paint those dots on by to make the queens easier to spot and to identify the year in which each queen emerged from her cell. I grew more fascinated. Later, Dianne prepared a small plastic container in which to mail several queens (complete with food and worker bees to care for them) to another beekeeper. Through Canada Post! I was astonished.

I began to think that I had found the subject for my next animal story. When I got home and started talking to my friends about bees, I began gathering bee stories, most notably stories about how common beehives are in Vancouver now. I learned that there are hives at the Convention Centre, at City Hall, and in many people’s backyards. Then a friend sent me a link to an article about Graeme Evans, then head of housekeeping and beekeeper extraordinaire at the Fairmont Waterfront hotel. The article was accompanied by a photo of Graeme, barehanded in a suit and tie, handling a swarming frame. That was when my story began to take shape. I wanted to write about the bees that live on the terrace next to the hotel pool and about two inner city children, Sophie and Matthew, who plant pumpkin seeds and then wait and worry, knowing that their plants will not bear fruit without bees. In Fraser Bear, I wrote about a bear and salmon coming together. In Big City Bees, I wrote about a pumpkin plant and bees coming together, an equally significant interdependence.

Since writing the book, I was listening to a program on CBC one day and they pointed out something that had never occurred to me through all my research and my writing and revising. Not only do bees communicate astonishingly complex information to each other through their waggle dance (direction, distance and quality of particular flower patches), but they do so in the dark!!

They are marvelous creatures. I hope you like the story I’ve written about them, and much more important, I hope you pay attention to bees in the gardens in your neighbourhood and that you do what you can to make those gardens hospitable to them.