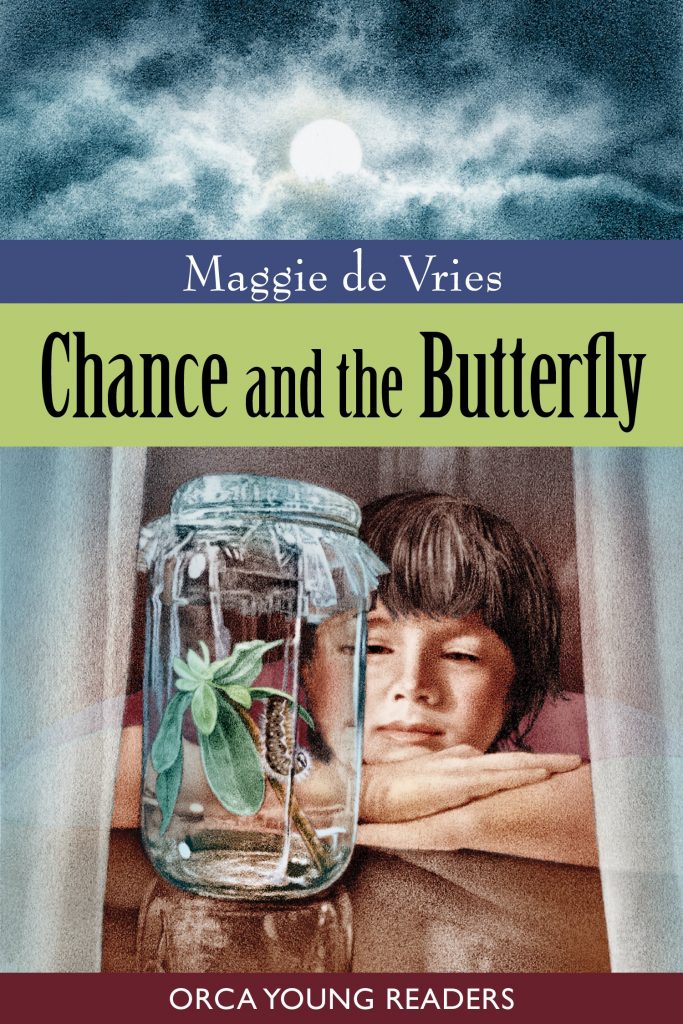 Every time Chance turns around, he gets in trouble. His new foster home is a cold, unwelcoming place where the foster parents’ son hates him. In his third grade classroom he’s been pegged as a problem child: he cannot sit still for two minutes together; reading is hard for him, and math seems forever beyond his reach. But Chance finds science fascinating, especially if it has to do with living creatures.

Then a long-awaited box arrives in the classroom. It contains tiny caterpillars and all that is needed to raise them into butterflies. For Chance, school has suddenly become fun again. He chooses one of the caterpillars to be his own. One day, he slips it into his pocket and takes it home. What follows could lead to tragedy. Or it could lead to friendship and healing.

I used to be a substitute teacher in elementary schools and once I was invited to spend a week in a classroom where they were raising butterflies. By the end of the week, I had an idea for a book!

And it wasn’t because of the butterflies as much as it was because of the boy. His name was not Chance. He was not Chance. I don’t know who he was, really, because I never found out anything about his life away from school. But in my classroom, that week, I think that he was the unhappiest child that I had ever met. He could not sit still. He hurt other children. He was sent to the principal’s office almost every recess and lunch. Once or twice, he ended up right on top of the desks, in a rage. He struggled with the school work.

But he loved the butterflies. When I arrived on Monday morning, the caterpillars had all formed into chrysalides and the teacher had attached them to the butterfly bush, a small tree under netting on a big round table in the corner of the classroom. Every time I turned around, all week long, I would find the boy there (I’ll call him Chance) watching those chrysalides.

By Friday, all of the butterflies had emerged and we were supposed to release them, but when I tried to give one to Chance, he kept his hands behind his back and refused to look at me. When we started off down to the field, he disappeared and I had to go in search of him. I found him by the door of the school, crying and crying because he did not want to release the butterflies. I took him by the hand and led him to the field. But we did not release all the butterflies that morning. One was still back in the classroom, too new, her wings too wet and crinkly to fly.

That afternoon, she was ready. I called Chance over and asked him if now he would like to release a butterfly. He nodded his head. I stood in the doorway of the classroom and watched him step out into the sunlight, lift the container up to the sky and let the small creature go free. Chance came back into the school, alight with joy. And there, I decided, was a book.

I went back the next year to see the rest of the butterfly-raising process, to take pictures and notes. And I began to write. The boy in my class turned into Chance, a troubled foster child, just arrived in a new family where the older boy hates him. By the end of the story, better relationships have formed and Chance is ready to consider his new place a home.

I am thrilled now to see the book out in a new edition. The boy who inspired my story must be through high school by now, and I have not been an elementary school teacher for many years, though I still visit schools regularly. The other day, I was in a middle school, and a boy put up his hand.

“My name is Chance,” he said! I had never met a boy named Chance before.

I hope that you enjoy meeting the Chance in my story.

Chance and the Butterfly
A Review by Gillian Martin Noonan

Chance, the title character in Maggie de Vries' Chance and the Butterfly, is an eight-year-old third grader caught in foster care. His life has been filled with mistrust and hardship such that he has grown to fit the label "problem child" often applied to him by teachers and other caregivers. The other title character, the butterfly, is appropriately chosen to represent how Chance believes the system views him. At the beginning of the story, Chance has come to live with a new foster family, a family with two other children -- 10 year old Mark (their own son) and baby Louise (another foster child). The parents are kind and welcoming. The mother, Angie, is preoccupied with dealing with Louise who is a colicky, fretful child. The father is often absent but tries his best to help Chance cope with the realities of his young life. Mark, however, does not like having foster children in his home. He takes his feelings out on Chance at every available opportunity, thereby leading Chance to retaliate and to be the problem.

A new school is another reality for Chance. His classmates take an almost immediate dislike to him which leads the reader to wonder what the teacher, Ms. Samson, told them prior to Chance's arrival. The teacher, nevertheless, is compassionate towards Chance. It is in Ms. Samson's science class that Chance learns about caterpillars and butterflies. The caterpillars are of special interest to Chance, and his studies eventually lead him to bring one home where he is faced with confiding in Mark. de Vries paints a poignant picture of Chance. The reader is immediately drawn to him as Chance is drawn to the caterpillar. Little of Chance's previous life is discussed directly, and so readers are left to draw their own conclusions from the few statements that Chance makes. The relationship with Mark is well portrayed. His negative feelings toward the foster children in his home are easily understood as is his softening towards Chance and the caterpillar now in residence in Chance's room.

The story is captivating. Readers will be easily touched by Chance and will want to know how his life progresses -- will he be faced with more loss due to his actions, or will his action this time lead to friendship with his foster brother and a place in this family and school? Thematically, this is a multilayered story about relationships and their role in self-discovery. For Chance, there is the caregiving relationship with the caterpillar, a tentative relationship with Mark, and a slow developing relationship with Ken, a Chinese classmate who is also a new boy and an outsider. It is this latter relationship which brings to Chance's life a friendship which makes him feel worthwhile within his peer group.

This is a story which deserves to be shared orally and discussed with children. As the tale of a realistic young outsider who may already exist within the schoolyard of those who read it, Chance and the Butterfly will touch the hearts and minds of those who experience it.

Copyright © the Manitoba Library Association. Reproduction for personal use is permitted only if this copyright notice is maintained. Any other reproduction is prohibited without permission.