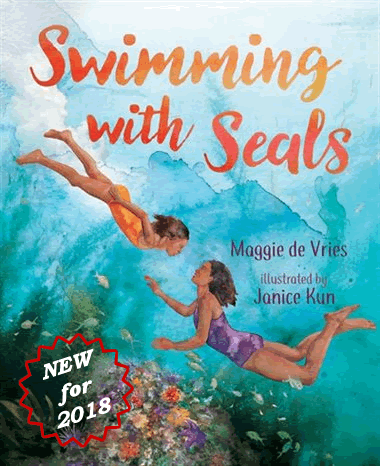 Ally isn't able to live with her mother. Instead she lives far, far away, on the other side of the country, with her gram and great-aunt. But one summer Ally goes to stay with her aunt and uncle in the "big city by the ocean" and gets to spend time with her mom. While exploring the shore, watching whales from the boat dipping into the salty water, Ally finds out something important: her mother loves to swim as much as she does.

This is a very personal story. Ally is based on the author’s niece, Jeanie, and Ally's mother is based on the author's sister, Sarah, who went missing from the Downtown Eastside of Vancouver in 1998. Jeanie is like a seal in the water, and Sarah was just the same, but they never got to swim together. In this story, they do. Swimming with Seals is a story that was written for the thousands of children who long to live with their birth parents and will never fully understand why they can't.

Kirkus Reviews - January 30, 2018
"The words and multimedia pictures excel at honoring the special time mother and daughter share…A needed…addition to diverse family stories, best for children whose caregivers are ready for questions."
Kit Pearson, award-winning author of A Day of Signs and Wonders - December 4, 2017
"The beautiful and carefully chosen words, along with the gorgeous pictures, evoke a poignancy as deep as the sea."