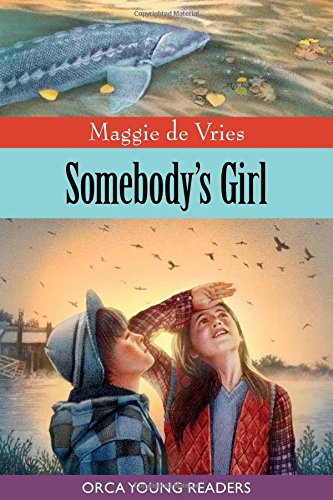 Nine-year-old Martha's daily routine is disrupted with the news that her adoptive mother is having a baby and that she must assume some of the household chores. To make matters worse, her biological mother is getting married and moving away. As Martha's world begins to shift, she feels alone and upset that she is no longer going to be an only child. Even her friendships with her closest friends begin to change as Martha pushes them away. Martha's frustration is heightened when she is paired up with an annoying boy named Chance to work on an ongoing project about sturgeon. She is forced to spend Christmas with Chance, a foster child with his own complex family dynamics, as Martha's parents are in the hospital preparing for their new arrival.

Martha's exploration of the natural world, alongside her navigation of her changing family life and friendships, collide during an emotional Christmas day. She closes her eyes and imagines "…something big [move] beneath the water. Something old. A sturgeon… She could almost feel the fish as it swam by, smooth and cools and wet against her skin." Martha finds comfort in these imaginings, which suggest to the reader a natural ebb and flow to her changing life. Her hesitant fascination with the fish, paired with Chance's enthusiasm for them, come together when Martha, in her loneliness, allows this natural world to enter her thoughts while she is stuck with Chance's family instead of her own.

Somebody's Girl explores the complex emotions of frustration, loneliness and uncertainty within a framework that can teach readers about responsibility and maturity. The well-developed characters are placed in detailed settings, experience believable feelings, and give the reader the impression that Martha could live down the street and Chance could be a schoolmate.

Martha knows she is adopted, but she's well-loved and popular, at least until her mother gets pregnant and she feels her parents' attention start to shift. Upset and confused, Martha lashes out at—and loses—her friends. She also makes no secret about her annoyance at being forced to do a school project about sturgeon with Chance, a difficult boy whose foster parents are family friends. To add insult to injury, Martha's birth mother announces that she is getting married and moving away. Now Martha isn't number one in anybody's life. When her mom goes into labour prematurely, Martha realizes that she needs to figure out a way to be a better friend and daughter, and a great sister.

If you have read Chance and the Butterfly, you have already met Martha. And I’ll bet you didn’t like her. In that story, Martha gets to be teacher’s helper, when Chance does not. She sits neatly, when Chance fidgets. She is happy to see Chance get in trouble, when he breaks the rules.

Martha is a little bit mean. Why? I wondered. And that question led me to write Somebody’s Girl.  I found out that Martha is one of those kids who likes everything just right, and her mom and her dad help her keep it that way. She is adopted and she is an only child. All her life, she has been the center of attention. Then, one day, her mother finds out she’s pregnant, and Martha’s world begins to change. It turns out also, just to make things worse, that Martha’s birth mother’s life is changing as well. And, to top it all off, Martha’s adoptive mom and Chance’s foster mom are best friends.

To write the book, I threw all those elements together and then wrote and wrote and wrote to see what would happen. Right away, in the opening pages, Martha’s class started studying sturgeon. You see, I wrote a picture book about sturgeon a few years ago and found out how amazing they are. In Somebody’s Girl, Martha gets to find that out too. When I was writing this new story, I went back to the Inch Creek Hatchery, which I had visited when I was researching Tale of a Great White Fish: a Sturgeon Story. But this time, I pretended that I was a nine-year-old girl. Then I wrote about it.

I had an incredible experience by the river near my house, where hundreds and hundreds and hundreds of crows flew overhead during a brilliant orange sunset. That ended happening to Martha too, and if you look, you’ll see that there it is right on the cover of Somebody’s Girl, along with the sturgeon!

That’s one of the things I enjoy most about writing: I can give my experiences to my characters. And, when I do, I can change them however I want. It’s fiction after all! I don’t think I realized when I was a kid that so much that authors put in their books comes from real life, and that every single bit of life can find a spot in a book somewhere.

You might be interested to know, as well, that my younger brother, Mark, and my younger sister, Sarah, were both adopted. They were different from Martha, though, because they were never only children. And in those days, children did not meet their birth mothers. I think that open adoption, where adopted children do have some contact with their birth mothers, is often a really great thing, but I wanted to write about how hard it might be as well for the kid. Not that it’s wrong, just hard.

I don’t have children of my own, but in the last few years, three of my friends have adopted children. I’ve learned a lot from them.