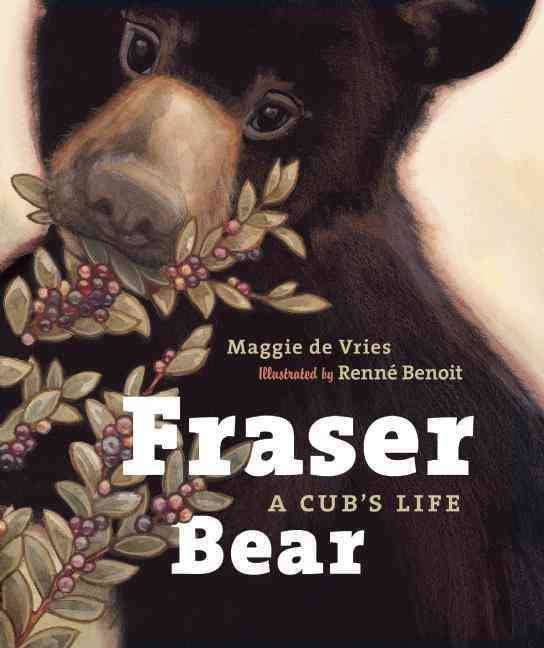 A picture book for all ages.

When the hero of this story is a tiny cub, still in the den with his mother, biologists come to examine the adult bear. While they do so, they place the cub in the arms of a young girl, and she bestows upon him his name, Fraser. Fraser Bear follows Fraser’s life out of the den and, in the months that follow, away from his mother.

At the same time, the story follows the life cycle of the chinook salmon that spawn at the headwaters of the Fraser River, where Fraser lives. If the bear cub is to survive, he must learn to catch these huge powerful fish himself, becoming part of the ecological web through which fish bring the ocean deep into the mountains, where their flesh and their bones feed the forest itself.

Fraser Bear, whose habitat is the furthest reaches of the Fraser River in British Columbia, has a life closely entwined with that of the Chinook salmon.

It is at the latter's spawning grounds, reached at the end of the fish's life after an ocean and river journey of thousands of miles, that Fraser and his ilk find the essential sustenance that supplements a diet of berries, nuts and grubs.

There is science aplenty here – in the season-by-season growth and development of the cub – all fascinating stuff for junior biologists, but it's the art, both prose and painting, that takes this book to a fine and high plateau.

In an example of perfect complementarity, author and illustrator have worked their magic: Maggie de Vries deftly weaves an engrossing and often suspenseful tale out of the facts, while Renné Benoit's paintbrush provides full-colour visuals of bear, salmon, river, meadow and forest, which make the spirit soar.

Fraser Bear is a delightful, gentle, yet scientifically informative story about a young black bear growing up near the Fraser River in British Columbia. The story, developed as a series of snapshots during Fraser’s first two years of life, focuses on his first year. As Fraser grows and learns, so do the young readers of his story: They learn about what is dangerous for young bears, about what bears eat, and, generally, about the life history of these animals and the environment in which they live. As an interesting adjunct to the story, the life history of the black bear—Fraser’s growing up—is tied-in with the life history of an important food source for these bears: the Chinook salmon.

This book is well produced, with high-quality binding and an attractive layout. The illustrations are works of art and add tremendously to the ambience created by the story. Both the illustrations and story can be anthropomorphic, but the story is intended for young children, so this is generally acceptable.

Of note, “Fraser” of the book has his origins as a stuffed toy bear of the same name created by the Pacific Salmon Foundation (a nonprofit organization dedicated to the conservation of salmon) and a for-profit train travel company, Rocky Mountaineer (which also supports the preservation of natural salmon habitats). Both organizations are openly acknowledged in the book (and if you look carefully, you can see trains in a couple of the illustrations of landscapes within the story).

This book will be a lovely addition to elementary school libraries, and I recommend its purchase for your budding naturalist at home.